This write up is the basis for an article in Issue 19 of Ultrarunning World on my race!

This was a repeat performance to overcome my DNF in 2017 of which you can read extensively here on this site.  Also you can find the rational for many of my gear choices as well as other information pertaining to this unique event.

Because so much was riding on it this time I took on this race with a seriousness I have not had in a very long time.  I was determined to overcome my previous “Broken Spine” and finish.  Even though it was my first race of the 2019 season, it was an “A” race for me.  There was no real time off from 2018!

While I was very comfortable with my running, I did add core strengthening work to my training.  I was not going to fail due to a week back again!  I also tapered off on my pack runs some compared to 2017.

I basically used the exact same kit as in 2017, and I mean the exact same items.  The only real change was my pack.  I went with a new pre-production Raidlight Responsiv 24 race vest with front pack.  This worked out much better than the 30-liter model I used before.  Fit was nice and snug and there was just enough room for my gear.

Other major items of my kit included:

One other minor change was the addition of Polar Bottle insulated water bottles (with the New Mexico Zia symbol of course).  These worked out quite well and Raidlight straw lids were compatible.  I only had one time when the straws froze up (because I didn’t blow them dry).  While meant to keep liquids cool in hot climates thermodynamics work both ways.  For those that use rigid bottles these are the way to go for the Spine.

Overall while not the lightest kit  (total was around 5.7 kg/12.5 lbs not counting water) it served me very well and I was prepared for any foreseeable conditions.

I went in to 2019 with the only goal of finishing, even if it took me the entire 168 hours.  I had no illusions of beating a predetermined time or finishing in the top X places.  This took some of the pressure off.  Additionally I planned on more rest/sleep time compared to 2017 and it helped.  I still tried to utilize daylight as much as possible but that did not work out quite as anticipated.  In the end my backup strategy was to be flexible and not stress it which worked out great.  I believe this is key to this race.

Drizzling, very windy but conditions under foot were acceptable.  I made sure not to push too hard and pay attention to navigation since I was determined to do better in that department.  Just prior to Torrside, Malc Cristy (fellow Spiner form 2017 whom I spent a good day with) was along the trail and gave me some hearty words of encouragement.  It was great to see him out cheering us all on!

I pulled into the CP about two hours ahead of schedule.  As such I decided to bed down and get some early rest instead of pressing on.  There I discovered I was having some minor issues with my feet.  I had removed my insoles to make some room for my socks which was not such a good idea.  I should have just used my larger shoes.  Rested, feet prepped and feed I was out of the door before 1:30 am along with fellow US runner Walter Handlooser.

The long haul in this race.  Stayed on my schedule and made Malharm Tarn in time for some dinner and coffee prior to heading out at dusk.  Pen-y-gent was windy and rainy of  course but what would you expect from the Spine?  After a short break at the Pen-y-gent cafe for some light snacks (should have eaten more!) I pressed on into the ever increasing winds on my way to Hawes.  Along the way I made one stupid navigational error by the tree farm (identical to one I did 2017) that cost me a little bit.

I finally made Hawes around 6:00 AM a good three hours behind where I had hoped to be.  Exhausted, I could barely stay awake to sort my kit and eat some food.  It was obvious that a change of plans was needed.  Sleep was more important at this time than daylight so I decided to get about three and a half hours of shut eye before pressing on.  Looking back this was a key decision in the long run for several reasons.

With my new and improved plan in place I eased out around the crack of 10:00 AM.  There was a long way to go and I didn’t want to beat myself down unnecessarily.   My wife Lisa was outside of the check point to see me off.  On my way out of town, I met up with Paul Horsewood who inquired if he could tag along with me for awhile.  Typically in the Spine, these partnerships do not last for very long especially this early in the race.  Unbeknownst to both of us we would cover the remainder of the course together!

With the good conditions we made our way over Great Shunner Fell and up to the Tan Hill Inn arriving late in the afternoon.  Lisa was there and commented that I was definitely looking much better than in 2017 (where my list to port was evident).  Since the Inn was not serving at that time we had some quick pack food and a Coke before heading out at dusk to cross the boggy moor on our way to the A66 underpass. 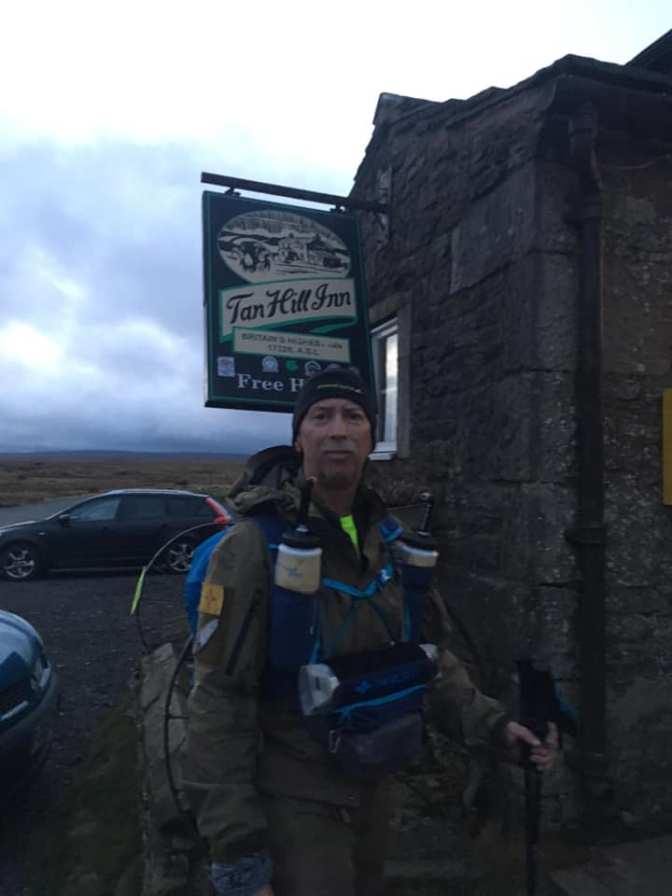 The rest of the way into Middleton was very dark and uneventful.  We arrived shortly before 1:00 AM and decide on a solid four hours of sleep.

Starting out the weather was very cooperative.  The trail to Cauldron Snout was sound and the we traveled by ourselves most of the day.  We made Dufton and noshed on a full English Breakfast at the Post Box Pantry.  This is a critical refueling stop for the trek over the Fells and one should not pass it up!  Darkness was falling as we approached Green Fell and the weather of course turned for the worse then with wind, snow and cold temperatures.  Eventually four of us linked up for the crossing over Great Dun Fell and Little Dun Fell and on to Greggs Hut.

Paul and I took a short break at the Hut but decided not to dawdle long.  We wanted to get out of the weather and down into Alston for some more sleep.  We made good time down the rocky path and eventually as the road turned north through Gargraves we were met once again by Lisa and her traveling companion Lynn Rowe how as cheering on Mark…

Compared to 2017 at this point I was feeling exceptionally better.  Back then I was dragging into Alston, leaning to one side and falling asleep.  This year things were much better.  The photos out in front of Lisa’s accommodations says it all. 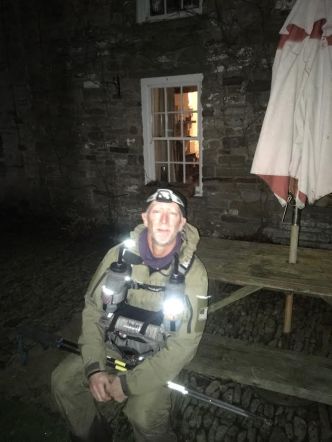 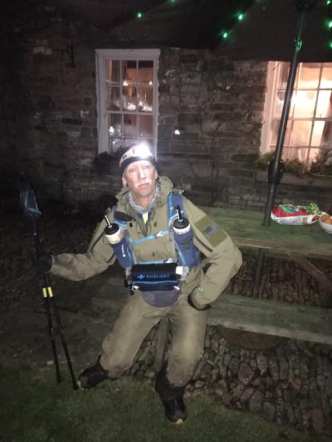 We eventually rolled into the Check Point at around midnight and after reloading for the next section and a huge plate of lasagna it was deep sleep time.

We traveled this day mainly by ourselves.  The weather was cold but clear and we clipped along.  At Greenhead we stopped at a pub for huge plate of French Fries (chips) and gravy and a large Coke. We then started the Hadrian’s Wall section.  A much more pleasant experience than in 2017 for me.  Paul would crush the uphills and me the downs.  It all evened out.  Lisa caught up with us around dusk to cheer us on.  Though we were tired, we both were in good spirits with lots of pleasant conversation along the way.

We eventually made our way to the Horneystead Spine Pit Stop where we were treated to a wonderful bowl of soup and some bread.  Helen who runs the Pit Stop remembered me from two years ago and we had a nice but short visit.  A quick thank you and we were out the door to Bellingham.  It was on this section in 2017 that I started to really crash, but now I was feeling my oats so to speak and believing that I was going to make it.

Once in the Check Point, we did the best to organize ourselves and get some sleep.  Unfortunately, it was cold and noisy and our sleep was at best restless.  Alarms were set for an early departure.

Bellingham is probably the most trying Check Point of the race.  It is a small facility and depending upon the number of racers there you may be in cramped quarters when trying to organize your kit.  A required kit check and a large number of others departing just before us made getting out the door slower than we had hoped.  The nice weather made up for the late start and our pace was excellent along the trails and roads.  In fact it felt as though we were really racing!

As we approached Byrness I started to remember back two years ago.  How I was limping along in the dark at this point and grasping the very real revelation that I was not going to finish.  But then an old church with graveyard full of headstones came into view.  It was there that I decided to bury these demons and move on.  They were gone and we made our way into the check station at Byrness for a quick bite and some cheers from Lisa.  Then and there I knew I was going to finish. Only 26 miles or so to go!

Probably some of the best racing over the entire week.  Great climbs, mountain running, hot tea in the huts and good conditions; well up until Windy Gyle.  There the obligatory Spine weather descended with high winds, freezing temperatures and poor visibility.  But heck, it is the Spine!  We were used to it.  Paul and myself finally made our way down to the road into Kirk Yetholm and below the worse of it.  The last couple of miles into town were surreal.  Exhaustion was taking its toll but the adrenaline rush of completing the challenge was offsetting.  Coming into the commons we were met by Paul’s wife…. who followed us in.  There were the cheering crowds, adoring spouses, the wall on the Boarder Inn and the medal.  We had concurred the Spine. 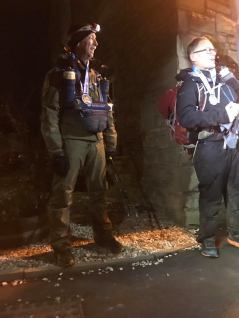 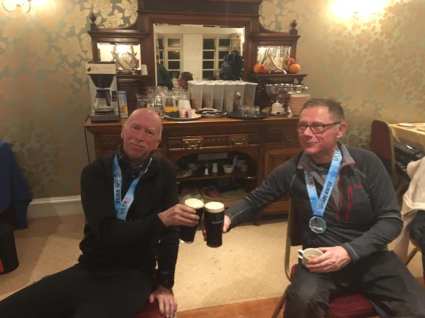 I believe that my success this year was due to some key aspects.

Some items of note that were not so great.

Please see Issue 19 of Ultrarunning World for an article on my race!